Creating a Build Radiator with a Raspberry Pi

See The first post in this series to get your Raspberry Pi setup with Docker and Docker Compose as we will be building on that foundation to get our build radiator set up.

Why a build radiator?

Pretty simple, really; visibility. The more obvious you make your problems, the harder you make them to ignore. The more attention they get, the quicker they get solved. Most of us have pretty good means of filtering out email, Slack, Twitter, and the like. If a red light flashes and a buzzer goes off in the physical world, it is hard to ignore. In addition when you have multiple teams contributing to one codebase it helps to remind teams to stop and swarm if any build breaks. If your team(s) ignore the red light then you have deeper issues that you need to address.

I assume you’re on a computer similar to mine (a MacBook Pro running MacOS). It’s certainly not a requirement. You could be using Linux or Windows, though some of the client-side tooling changes (PuTTY for Windows SSH, as an example). I’m confident that if you are interested in the fairly advanced concepts I’m presenting here, you will figure it out and translate to your platform of choice.

To get up and running quickly I did a search for solutions out there and I ran across this Link to Python solution on Github. One advantage is that I knew I could get this up and running very quickly. The disadvantage is that it only works with Jenkins and I currently have projects using Travis CI, Jenkins, Drone.io, and Netlify. I’m a huge fan of getting something working, anything. Then iterate and refine the product, adding features. I also looked at the code and setup and decided it would be easy to run everything in a Docker container.

Eventually we want a setup just like Bram Driesen shows in the excellent ReadMe / article accompanying the code, but for starters I’m going to use a simple setup to ensure that the code, config, and logic are all working. This is my minimum viable product or MVP. In a future post I’ll walk through upgrading to the Tower Light. Beyond that I’m thinking that I eventually want to use a Neopixels LED Strip, but I have not decided on the final product yet.

Here is a basic diagram of the V1 (MVP) setup: 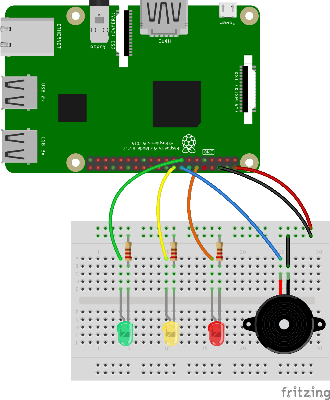 I did have to make a couple modifications to the source code to work with Python 3.x, so I forked the original repository to https://github.com/stevebargelt/rpi-jenkins-tower-light.

First, we will SSH into our Raspberry Pi. If your Pi isn’t setup for this see The first post in this series. (and obviously use your IP address!)

Then clone the repository:

Next we need to copy and edit the config file:

Edit the config to model your Jenkins settings and your LED GPIO pins. In Jenkins, I’d suggest creating a new user just for this purpose so you can limit the access rights and disable the account should the config file be compromised.

So now we have our configuration settings in the config file.

Dockerize all the things

We don’t want to just run this code… we want to run it in a Docker container. Why? Python 2.7 (the default version on our Raspberry Pi Raspbian image) is the past and I’d rather not install and update Python versions on my Raspberry Pi. For all the reasons I listed in the first part of the blog series we want to containerize as much as we possibly can. The main benefit is in my opinion is the repeatability of the process. If we run this in a Docker container, we can easily remove it from the device and re-purpose it. We can also easily update to a new base image (a new version of Python). It keep our base OS image as clean as possible.

Use your shell editor of choice to create a new Dockerfile:

In the CMD “-u” un-buffers the Python output. For the longest time I thought there was a problem with Python writing to the stdout (via print, etc.) because I never saw anything in docker logs jenkins-py - apparently it was just buffering.

Next up, build the Docker image:

Then we run that image:

If all is well with our setup and our Jenkins jobs, the green LED should illuminate. 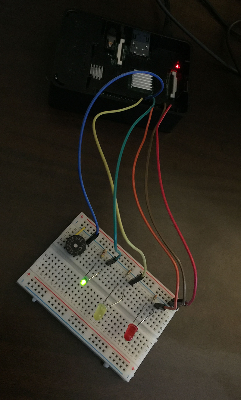 If all is not well with our setup then here are a few troubleshooting tips.

To get into the docker container to poke around:

To see the logs:

The most common problems I ran into were with my config settings (incorrect project names, bad jenkins password).

You Don’t Have To Turn On The Red Light

Alright, not super exciting if the light is always green, right? How do we know this will work if a build fails? I am going to break a build to test the system.

the job will fail

We should see a red light come on… 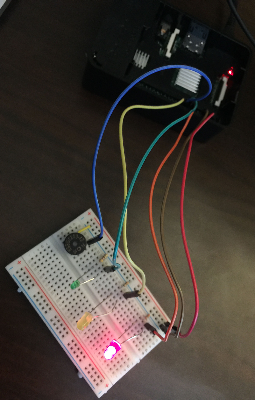 It works! My Jenkins job failed and the red light on our MVP hardware lit up.

Since everything looks legit, we can tell Docker to always restart this container.

If you’d prefer to use Docker compose here is the docker-compose.yml file:

We now have a Minimum Viable Product of a build status radiator that you can show your boss and your co-workers in order to get them on-board to move to the next step… in the next installment we will add a real Tower Light on the hardware side of the fence.